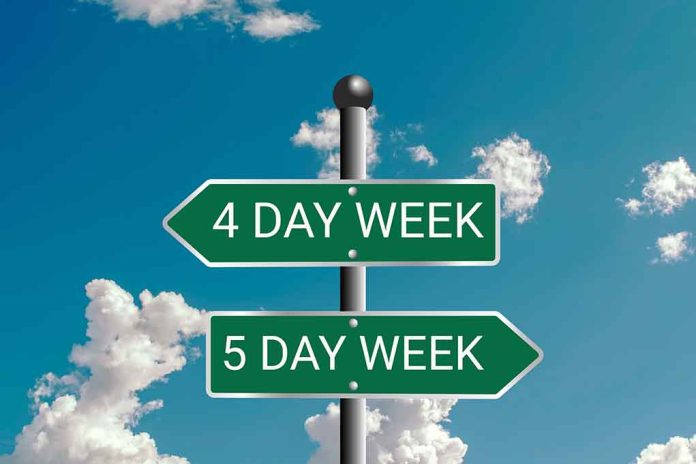 (ReliableNews.org) – Over the last few years, there’s been an ongoing debate about the benefits of four-day workweeks. Many workers have spoken out in favor of the idea. Experts believe this change could have a positive financial impact on workers.

According to a report by The Guardian, European think tank Autonomy believes a four-day work week could save workers £1,440 (about $1,632) in childcare costs per year for a kid under the age of 2. Additionally, they’d save money for the commute and help families struggling in the wake of the global inflation crisis. The news came after a six-month pilot program testing the idea passed its halfway point. Joe Ryle, with Autonomy, explained how the switch would allegedly also increase productivity.

Iain Dale quizzes Joe Ryle campaign director of the 4 day week: 'It is difficult to understand how someone can be as productive in 4 days as they are in 5.'@IainDale | @JoeRRyle pic.twitter.com/oFdel5waHo

Experts have also said American workers and employers could benefit from the switch. Additionally, companies could save money on overhead costs by not opening up an office building five days per week. Just like European workers, those in the US could benefit from decreased travel and childcare costs.

Thirty-eight companies in the US and Canada joined a similar pilot program launched by 4 Day Week Global. The program started on June 1, and results are not yet in for those businesses.

Do you support a four-day workweek?