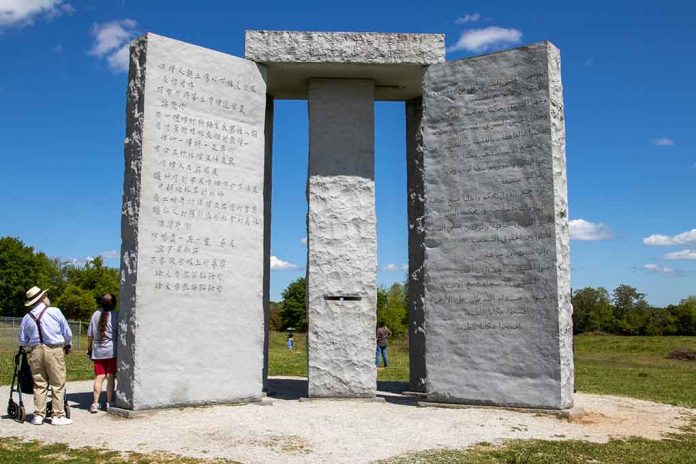 (ReliableNews.org) – The Georgia Guidestones were known as “America’s Stonehenge.” Now vandals have destroyed the towering landmark. Law enforcement is trying to figure out who would do something like that to Elbert County while others are celebrating.

On Wednesday, July 6, someone set off an explosive device at the Guidestones monument destroying the granite structures. The Georgia Bureau of Investigation decided to demolish the rest of the monument for safety reasons. Officials made the announcement on Twitter and also shared a video of a suspicious vehicle leaving the scene of the bombing shortly after it detonated.

(1/3) The GBI is releasing surveillance video from this morning’s explosion that destroyed the Georgia Guidestones. pic.twitter.com/Vo3RyjDxdN

The Guidestones were erected in 1980 and sat in the northeastern part of the state in Elberton. According to the town’s chamber, a Christian man paid for the monument because he wanted to “leave a message for future generations.” The granite structure resembled Stonehenge with four massive slabs that had a message of unity written in eight different languages including English and Hebrew.

While many people enjoyed the monument, there were those who believed it was satanic. In 2022, failed Republican gubernatorial candidate Kandiss Taylor campaigned on a platform to have the site demolished. She released a video claiming it was made by a “Satanic Cabal.”

I am the ONLY candidate willing to stand up to the Satanic Cabal. Time is running out to support my fight.

When the monument’s destruction made the news, she claimed God struck down the stones. Law enforcement has made it clear it was not the Lord but instead, just ordinary vandals with a bomb.

God is God all by Himself. He can do ANYTHING He wants to do. That includes striking down Satanic Guidestones.

Georgia authorities are currently searching for the suspect or suspects responsible for the destruction of the monument.